A staggering number of people across Ireland and worldwide are effected by autoimmune conditions and many more remain undiagnosed. The statistics are not exact, but estimates come in at about 1 in 12 people affected worldwide. There are more than 80 types of autoimmune related conditions. These include conditions such as Coeliac disease, Hashimotos’s thyroiditis, Lupus, Parkinson’s, Multiple Sclerosis, Rheumatoid arthritis and Type 1 Diabetes.

The immune system is designed to protect the body from outside threats such as bacteria, viruses, and toxins. When the body comes under attack, a number of immune cells and immune proteins known as immunoglobulins attack the intruder, defeating the looming illness. Autoimmune diseases result when the immune system becomes confused and can no longer distinguish between the body’s own tissues and those which belong to an outside threat. Essentially, the immune system miss-fires and attacks its own cells.

In Naturopathic Nutrition the practitioner works with the patient to identify the root cause, not just treat the symptoms. The root cause is often multifaceted, and is typically related to nutritional deficiencies, undiagnosed food sensitivities, chemical and heavy metal toxicity, excess stress, lack of exercise and sleep and a genetic predisposition which can be switched on or off through diet and lifestyle, something called epigenetics. Read more on the root cause of chronic disease here. 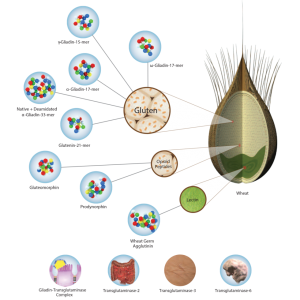 As mentioned above, one of the root causes for chronic disease is undiagnosed food sensitivities with gluten leading the way. Gluten is a protein found  in grains such as wheat, spelt, barley and rye. The population at large has a good understanding of Coeliac disease, an autoimmune condition triggered by gluten where the immune system miss-fires and attacks the villi of the intestines. Yet, there seems to be misinformation or misconception around Non-Coeliac Gluten Sensitivity and its huge significance in chronic disease. For every 1 Coeliac there are at minimum 8 with disorders related to Non-Coeliac gluten sensitivity. Ireland is thought to have the highest incidence of Coeliac disease in the world. What does this say about the number of individuals with Non-Coeliac Gluten Sensitivity?

Many experts believe that there are toxic peptides within gluten that are detrimentally affecting any tissue within the body not just the intestines. For every 1 patient with Non-Coeliac Gluten Sensitivity suffering with digestive issues there are 8 without digestive complaints. The gluten protein is pro-inflammatory in nature, and eating gluten launches an inflammatory cascade in Individuals with a sensitivity, diagnosed or not, leading to a multiplicity of symptoms. The symptoms may manifest within the intestines, skin, muscles, nerves, brain and beyond. Issues such as Irritable Bowel Syndrome, dermatitis, psoriasis, myopathies, carpal tunnel syndrome, anxiety, depression, ADHD, and more can be linked. These symptoms should be viewed as a warning and should not be ignored. Research has found that autoimmune disease is 10 times more likely in Gluten Sensitive individuals than in the general public. This is significant.
There are thousands and thousands of people walking around with undiagnosed gluten sensitivity. The patient may KNOW that wheat and possibly all grains containing gluten cause them issue yet the standard test may come back negative and the doctor tells them they are OK. This may seem to comes as good news to the patient who has no desire to go without the plethora of readily available gluten containing products. But, as they continue to eat the trigger, damage is being done. 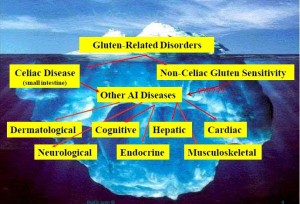 There has been much frustration among practitioners with the lack of sensitivity and specificity of standard tests for gluten sensitivity and coeliac disease. There is a need for more sophisticated testing that might also pick up the presence of autoimmune antibodies before the symptoms become chronic, degenerative or life threatening. Such a test could assist clients with a family history of autoimmune conditions, such as autoimmune dementia or thyroid disease, to take positive steps to reduce the risk of onset. This is the concept of epigenetics where diet and lifestyle alteration can modify the expression of genes within the body.

It is exciting to know that the technology now exists. Cyrex is a clinical immunology laboratory, based in Phoenix Arizona, specializing in autoimmunity. They offer multi-tissue antibody tests and specialize in gluten sensitivity, cross reactivity and more. This testing is now available in the UK through Regenerus Laboratories.

If you suspect that you have an issue with gluten or if you have unexplained symptoms that might be associated, it is wise to get tested. The longer sensitive individuals eat gluten, the more likely they are to develop autoimmune diseases. Antibodies tend to be elevated for years before symptoms of autoimmunity arise. For example one might have antibodies to their myelin (surrounding the nerves) and years later begin to notice muscle weakness, fatigue, dizziness etc. which then may progress for years before a diagnosis is given and they have full blown Multiple Sclerosis (MS). Early antibody identification may result in early treatment, better quality of life, and improved prognosis.

The Cyrex lab tests are available to the public through qualified practitioners such as myself exclusive through Regenerus labs. There are 11 arrays available and any test can be run on its own or in combination. For full details on these arrays contact Regenerus Labs or myself. The full range of test arrays will be available through Root Health Naturopathic Nutrition July 1st.

A very big thank you for your help and advice. After twelve years of taking nexium every day, I am now on my 13th day without them....I was sure that I was stuck with them for life and so again thank you so much for showing me the way.

I'm only on the regime for 6 days and already I feel so much better. I never realised how bad I was feeling until it stopped!!! My tummy feels really calm and happy as opposed to really tight and upset ... Thank you so much for all your help.